The only exception is that I don't include the cost of air cutoffs or accelerator pumps on models so equipped. Often I'll find relatively new ones from an earlier failed attempt to resurrect the bike so I wait intil I can assess them firsthand to determine whether they're needed or not. Plus, my costs keep going up and are thus prone to change without warning. Right now they're 100 dollars for the whole kaboodle.

I also don't include the cost of new dust boots on the 70's CB750 models. Those are 95 dollars for the wole set, for the guy who wants a truly authentic look.

We're a busy shop and I only do motorcycle carburetors, every day all day. I have customers all over the world so expect a wait time of around 10-12 weeks to have them back. My son, expert technician that he is, is busy with college and another job, so most of the time it's only me. There aren't any shortcuts if you expect a perfect job and it just takes time. The one thing I always say to folks who ask when their carbs will be done is that I appreciate your patience--you won't be disappointed. 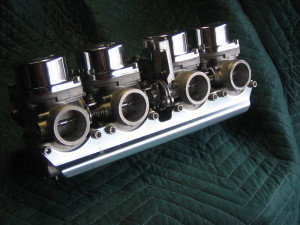 The DOHC models have their own unique issues.

They use a vacuum operated slide and each carburetor body has an air cutoff; plus, they're equipped with an accelerator pump that spritzes a little gas directly down each carb throat when you blip the throttle for quick response on takeoff.

The accel pumps were never designed to stand up to modern fuel additives and the air cutoffs simply wear out. The combination of these two systems falling out of spec over time is a gradual loss of performance.

DOHC carbs also employ very small jets located deep inside the carburetor bodies, either press-fit or screw-in depending on the model, which regulate how much fuel gets into the slow speed and idle circuits. Having a hair-sized orifice, they're extremely sensitive to the tiniest amount of disruption. If just one of them gets clogged it'll drag the whole set down with it.

Imagine piggybacking these gremlins on top of each other to one degree or another and you'll have an idea of what I see every time I open one up.

The good news is that it can all be brought back to better than new condition.

The reason I say 'better than new' is because I "normalize" every jet before I install it. Jets are manufactured in large quantities on machines whose tolerances shift as the bits wear. Even if a jet is only a 10-thousandth of a millimeter off and well within factory tolerance, it's still different. I've acquired tiny CNC mills of every imaginable jet size to make sure that every jet--especially the all-important slow jet--is exactly the same size. 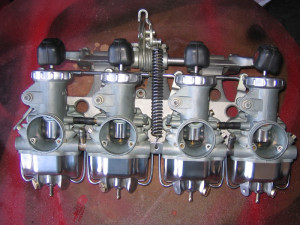 The SOHC models are easily the most fiddled-with of all the carbs I see, owing both to their age and the fact that they're so easy to remove. This has allowed a lot of well-meaning previous owners to try their hand at various tweaks. Some worked, but others led to the bike being labeled as a lost cause and parked long ago. So a new owner happens along and this is where we come into the picture.

The two most common "improvements" that tend to go south are 1) Raising or lowering the main needle clip setting without having first determined if it was wise, and 2) Installing main jets that are too large. Simple logic dictates that if we had more gas we'd have more power. This is true to a certain extent but it also tempts one to assume that if a little is good, a lot must be better. In truth the opposite is true; if we don't have enough air to burn the extra fuel we'll see a drastic loss of power.

It's all about balancing fuel availability with air flow through the entire system from the air cleaner to the exhaust pipes to find the optimal mix for whatever setup you have--pod air cleaners, aftermarket pipes, etc.﻿

My service starts with a thorough evaluation and a completley transparent policy about what you might need; most sets usually don't need anything but "kits and cleaning" but if I find something serious I have lots of spare parts on hand. What I won't do is hit you with a bunch of add-ons. If I find a broken float post, a nozzle that needs to be drilled out, or a stripped thread that needs an insert I'll generally take care of it without you ever knowing. Obviously if it's something serious there will be an extra charge but I'm not known to overcharge for parts.

After we have determined that your set is restorable, we get to work.

Your carbs should come back to you ready to bolt on and run. Ovbiously there are times when you'll need to perform a final synchronization but they're very rare and it's an easy process. (See below)

What goes into your carburetors is more important than making them pretty.

The principal symptoms of poor synchronization are slow or hesitant return to idle from revving. You'll also find that the idle will tend to rise uncontrollably as the bike warms up. This is assuming that there's no binding in the cables or grip, obviously.

What's happening is that the individual butterflies or slides are hanging a tiny bit more open or closed relative to the others and the carbs essentially wind up in a tug of war.

We synch on the bench with a constant rate vacuum (shop vac motor) but we can't replicate real-life dynamics. Valve clearances, cam timing, and/or compression-related issues all have an effect on vacuum so a final adjstment is sometimes needed. That said, in this business no news is good news so the lack of people calling with synch troubles suggests that we're doing something right.

It might be fine for my wife's jewelry but I don't use it and in fact I'm against the practice for several reasons.

For one, it only cleans the grime off of things--and very well at that to be sure--but vibrating water doesn't circulate so by it's very definition it's not going to clear a blockage, especially when you consider how tiny some of the passages are. Maybe it can soften the crud that's causing a problem but the only way to do it right is the hard way: get in there with actual physical tools that will do the job without the risk damaging anything in the process. That's why I pull everything out, even the press-in jets.

This leads to my second complaint. I've seen carbs destroyed when jets were left in place and the ultrasound solvent wasn't rinsed out. Even something as seemingly mild as simple green, a favorite amongst practitioners, is corrosive enough to etch both aluminum and brass when it remains trapped in an internal cavity. I spend a lot of time making sure that there's nothing inside those passages that can come loose later on, or remain behind to erode a connection that needs to be fuel or air tight.

I'm sure that ultrasound is perfectly safe when used properly, but what's the point? Ultimately, at least as far as carburetors are concerned, it's totally unneccessary; plus which you'd be tempted to skip a crucial step believing that it's doing a job it's not actually doing.

So at best it's merely useless; at worst it's catastrophically destructive.